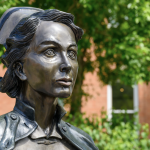 The biggest reason for nurses being absent from work due illness in England, Scotland and Wales is mental ill-health. In Northern Ireland, it is the second-biggest reason. C3’s nursing programme aims to develop strategies to promote the wellbeing of the nursing workforce. Our ongoing work to address the healthy weight of nurses has led to the significant consideration and analysis of nurses’ mental wellbeing.

In 2020, commentary describing concerns about nurses’ mental health and wellbeing had reached a crescendo. A review of the literature describing the poor mental health and wellbeing of the nursing workforce was conducted by the Society of Occupational Medicine – The Mental Health and Wellbeing of Nurses and Midwives in the United Kingdom. The breadth of literature reviewed highlights the significant work that has been undertaken to show that nurses’ mental health is a real issue. Nevertheless, not enough has been done to actually address it. Little progress has been made in taking forward the sound recommendations from Steve Boorman’s 2009 NHS Health and Well-being review, also known as the Boorman Review.

The danger of ignoring the Boorman Review findings was evidenced in 2013, when the findings of the Francis Inquiry – into the failures of care at Mid-Staffordshire NHS Foundation Trust – revealed that staff wellbeing had not been adequately recognised or indeed, acted upon. Commercial companies had already acknowledged staff wellbeing as being critical to success and subsequently a workplace health industry was growing rapidly – but the NHS appeared still to be taking staff wellbeing for granted.

A decade later, progress continues at a glacial pace and the dangers of ignoring staff wellbeing  become more and more apparent.

A decade later, progress continues at a glacial pace and the dangers of ignoring staff wellbeing  become more and more apparent. Like the Boorman Review of 2009, the publication in 2019 of the NHS Staff and Learners’ Mental Wellbeing Commission – the Pearson Report – is another well-researched commentary on how a caring and compassionate NHS should demonstrate and reflect these values as an employer in caring for its staff. Once again, however, its recommendations have not yet been fully implemented. In 2020, The Courage of Compassion report, published by the King’s Fund, catalogued the breadth of the problem and called for action on its recommendations.

C3’s analysis of the policy landscape involved 15 semi-structured interviews with key thought leaders that explored the barriers to supporting nurses’ mental health, and how evidence-based recommendations may be implemented. The most overwhelming observation to emerge from this scrutiny of nurses’ mental health and wellbeing, and the policy environment is the persistent failure of the health community to act on previous relevant analysis and recommendations that have endeavoured to address the problem of how to support the nursing workforce and facilitate wellbeing. The evidence is right there, in the outputs of the 2009 Boorman Review that included a set of twenty recommendations that remain as relevant today as they did in 2009 – but have still not been properly implemented.

Two recommendations have emerged from the thematic analysis of interview data, they are: