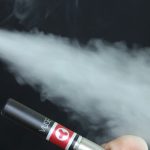 I’m Laura, a junior Science-Business major at the University of Notre Dame in Indiana, United States. This semester I am studying abroad in London and I have been an intern at C3 for over a month, which has given me quite some time to acclimatise to British culture. Nevertheless, I had a lot of things to worry about when walking around London. Amidst my confusion over what a ‘queue’ is and where I put my Oyster card, I couldn’t help but notice how many people were constantly vaping as I explored the city; it’s pretty hard not to notice when the fruity vapour seems to be a perpetual scent across the city.

The modern cigarette industry began in the 1860s while the modern vape was first manufactured in 2003.[1] Vaporizers (vapes) grew in popularity in the UK when the 2007 ban on smoking indoors was enacted, however the use of vapes was left to the discretion of the firm.[2] Since then, vaping has gained popularity because it helps one fit in socially, costs less than long-term use of cigarettes, has a variety of flavours, and is suggested by the NHS for smoking cessation.[3] Of the approximate 2.2 million current vapers in Great Britain, 53 per cent have used e-cigarettes to aid in their smoking cessation process.[4]

All vapes have three main components: a chargeable battery, an atomizer which heats the e-liquid with coils to create the vapor and e-liquid that can be flavoured. A vape is a general category that includes electronic cigarettes, vape pens and mods. An electronic cigarette, or cigalike, has the same look as a traditional cigarette. Vape pens and mods are more advanced versions of vapes that have a longer battery life and allow more personalization to the smoking experience. The battery, atomizer and e-liquid work in unison to create vapour in the mouth that is exhaled as a cloud of vapour.

The health risks of cigarettes are now well known, they include: lung and other types of cancers, COPD, heart disease, impotence and decreased fertility.[5] However, there was a time period of approximately 70 years during which cigarettes were popular and accessible before they were known and accepted to be dangerous to health in the 1960s.[6] Even so, there is still a prevailing misconception that nicotine, instead of tar, is the harmful ingredient in cigarettes. As a study by M A H Russell states, “people smoke for the nicotine but they die from the tar.”[7]  Smoking is especially prevalent in disadvantaged groups and according to Public Health England, it is the main contributor to health inequality in England. [8]

There has only been approximately a decade of research done on vaping but no definitive, longitudinal studies on the health risks of vaping. Even so, most e-liquids contain nicotine, the addictive substance also found in traditional cigarettes. Inhaling nicotine is known to raise blood pressure; increase heart rate; increase the likelihood of cancer and heart disease. Additionally, nicotine is known to be extremely addictive and can cause withdrawal symptoms after only a few uses. Vapes often have flavourings that contain diacetyl, a compound that can cause serious lung diseases such as popcorn lung. Recently there have been studies that found the heavy metals in the actual vape device could be leaking into the e-liquid and then inhaled.[9] It is important to realize that there is no definitive study that links vaping to cancers or heart disease yet.

When comparing the two, the NHS states that “e-cigarettes are 95 per cent less harmful than smoking.”[10] Though the NHS is not able to prescribe e-cigarettes, the organization lists the product as a smoking cessation tool.[11] Public Health England found that using e-cigarettes makes a person one-and-a-half times more likely to be able to quit smoking. Additionally, the same report also states that 1.2 million vapers have quit smoking using vaping with 750,000 of those people being able to quit both vaping and smoking while an additional 600,000 people are currently using vaping to quit smoking. Unfortunately, there are approximately 600,000 smokers who use both vapes and cigarettes with no plans on giving up either.[12]

As a twenty-year-old in an age group at risk of developing these habits, I can confidently attest that factors such as the flavoured e-liquid, an emphasis on vaping being ‘healthier’ than smoking and the misconception that vaping is not addictive really has an effect on young people. My interactions with vaping come from seeing peers engage recreationally and socially in this practice while using these factors as validation for their actions. Almost 32 per cent of 16-24-year-olds in the UK have tried an e-cigarette which is more than any other age group.[13] From experience, the pressure among my peers to try the habit is incredible and not limited solely to the States. In a study done by Dr. Derek Yach, in 12 out of 13 diverse countries, smokers are more likely to have close friends who are smokers than ex-smokers or non-smokers do.[14] The influence among peers for smoking is shown to be consistent across cultures and could potentially be similar for vapes.

In adults between 50-59-years-old (my parents’ ages), 5.4 per cent are current e-cigarette users which is almost identical to the 5.5 per cent of 16-years-old and older that are current vapers.[15] I don’t know if peer pressure in the older age brackets is evident but the popularity of vaping across the age groups is unmistakable.

The Department of Health is working to create a smoke-free generation through setting incremental objectives to reduce the number of adolescent smokers, adult smokers, prevalence of smoking during pregnancy and to reduce the inequality gap in smoking prevalence. By 2022, Public Health England is hopeful to achieve these goals and be even closer to a smoke-free generation.[16] It will be interesting to see how vaping play a role in reaching this goal. Although British culture has been a bit of a shock from the typical American customs that I’m used to, the prominence of vaping was one of the few things that felt completely familiar.

[4] Office for National Statistics (2017). Most people use e-cigarettes to help them quit smoking. https://www.ons.gov.uk/peoplepopulationandcommunity/healthandsocialcare/drugusealcoholandsmoking/articles/mostpeopleuseecigarettestohelpthemquitsmoking/2016-02-18

[13][13]Office for National Statistics (2017). E-cigarette use in Great Britain. https://www.ons.gov.uk/peoplepopulationandcommunity/healthandsocialcare/drugusealcoholandsmoking/datasets/ecigaretteuseingreatbritain

[15]Office for National Statistics (2017). E-cigarette use in Great Britain. https://www.ons.gov.uk/peoplepopulationandcommunity/healthandsocialcare/drugusealcoholandsmoking/datasets/ecigaretteuseingreatbritain

[16] Department of Health (2017). Towards a smokefree generation. A tobacco control plan for England. https://assets.publishing.service.gov.uk/government/uploads/system/uploads/attachment_data/file/630217/Towards_a_Smoke_free_Generation_-_A_Tobacco_Control_Plan_for_England_2017-2022__2_.pdf

Laura Funk is an intern at C3 while she is studying abroad in London. She is in her third year of pursuing a science-business degree with a minor in anthropology at the University of Notre Dame.
Share this: