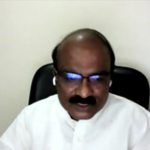 How should healthcare professionals go about explaining to patients what hypertension is and why it poses a risk to their health, when there are no symptoms and the patients feel fine? This was just one of several key questions discussed among attendees at the end of C3’s International Seminar yesterday, delivered from New Delhi.

Prof. Dorairaj Prabhakaran is a cardiologist, and Vice President of Research & Policy at the Public Health Foundation of India, Executive Director of the Centre for Chronic Disease Control, New Delhi and Professor of Epidemiology) at the London School of Hygiene and Tropical Medicine. He joined C3 to speak about the innovations taking place in cardiovascular thanks to longitudinal research being carried about by him and his colleagues

Using hypertension as the main exemplary thread throughout the seminar, Dr. Prabhakaran began by noting some of the great advances made over the past several decades in the treatment of CVD care. In high income countries, there’s been a 50% decline in deaths from CVD, and similarly there has been a decline in heart attack deaths from 30% to 4% in the past 50 years. Nonetheless, he pointed out, there remain large disparities in care between and within countries, as well as a lack of simple and effective drugs to treat such disease around the world. Opportunistic screening, telemedicine, scaling up and innovation of hypertension control innovations, and communicating effective policy options for policy-makers all have a role to play in improving the situation worldwide.

Because there are many elements to the question of how to reduce gaps in prevention and treatment of CVD in developing nations, from scientific credibility to operational stability to financial feasibility to political viability, Dr. Prabhakaran posits that a trans-disciplinary approach is essential.

Paradoxically, while hypertension is easy to diagnose and easy to treat with several freely available and potent drugs, diagnosis rates are very low, treatment rates are equally disappointing and control rates for these drugs are, in his words, “abysmal”. Knowledge, motivation and skills, he pointed out, are essential to the pathway to health promotion (he emphasised the idea that for patients to think: “I act”, they must first be able to say “I know”, “I want”, and “I can”. After that, patients are more likely to be proactive in seeking care. This is where opportunistic screening comes in.

The PHFI has run initiatives to encourage screening in collaboration with other organisations, designating May as Measurement Month, and implementing Clinical Decision Support Systems (CDSS) workflows in government health facilities which integrated measurement for hypertension within the standard treatment of patients over thirty years of age.

Dr. Prabhakaran also spoke about the mPower Heart mHealth System Android App developed to support healthcare workers in India. Designed to be integrated with other platforms, the system stores patients’ longitudinal data in electronic format, provides clinical decision support for conditions such as diabetes and hypertension and tracks patients’ follow-up appointments so that they may be contacted should they need to return to the health facility. The results of the mPower Heart Project run with this app over 18 months were extremely impressive.  With 21,000 patients screened, 6,800 were treated for hypertension, 50% of which were first-time detections. The fall in blood pressure and in blood sugar among treated patients was dramatic and sustained. Given that none of the treatments deviated from drugs already part of the Indian public health standard.

From then on, these trials were expanded to tertiary care, primary care, state level and now national and international level (with a trial taking place in the Maldives.

Dr. Prabhakaran also spoke eloquently of the challenges regarding regulatory roadblocks prior to March 2020 in the area of telemedicine. With the beginning of the Covid-19 pandemic, much of these regulations were quickly ameliorated to accommodate the on-coming health crisis. While telemedicine has been a boon at this time, he was keen to point out that challenges remain in access and lack of clinical history and laboratory parameters that aid physicians in decision-making.

From Mobile CDSS systems, to backpacks full of essentials for healthcare workers treating CVDs, to portable ECGs, Dr. Prabhakaran described the various digital health technologies being employed across India. Furthermore, portable health kiosks and even a vehicular clinic, for populations in remote areas, all form part of the public health toolbox, allow for a more agile and far-reaching response.

Finally, he spoke on the matter of environmental determinants such as air and noise pollution and the availability of green space, something which chimes with a lot of the work C3 does around CHESS, particular with Project ASPIRE. Using the example of a study he and his team carried out in New Delhi around air pollution, Dr. Prabhakaran demonstrated how they measured the effect of a higher level of particulate matter in the air and rates of prevalent hypertension. In conclusion, he noted that while frontline healthcare is an essential piece of the puzzle in working to combat CVD, it cannot be relied upon as the only solution. Without sustainable policy implemented from above, all efforts on the ground are doomed to failure.

Watch the full seminar below: