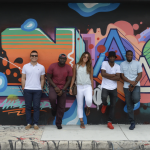 Today is International Youth Day, a day for bringing into focus and considering issues surrounding young people across the globe.

At C3, our vision is a world where people aren’t dying of preventable chronic diseases, because they are finding it easier to live healthier lives. We work to bring together different individuals and communities to create changes which help people:

Each of these habitual changes are most effective in the young, firstly because they have more life ahead of them than people of other age groups and secondly because when we are young, habits are formed which can last a lifetime.

In a longitudinal study published in the official journal of the American Academy of Paediatrics in 2013, it was found that the children of smokers were three times more likely to become smokers than their counterparts whose parents did not smoke. Interestingly, whether the parents were daily smokers, or merely occasional or ‘social’ smokers did not have a significant impact. Smoking of any kind was what had the greatest impact.

Given that tobacco kills up to half its users, it is clear how much of a difference to children’s health parents can have when they quit using tobacco products.

According to the World Health Organisation, obesity worldwide has nearly tripled since 1975. In 2016, 380 children were living with overweight or obesity – a number that is only growing. Obesity tracks from childhood into adulthood and increases with age from that baseline of childhood obesity. It is a suggested factor for morbidity and mortality in later life with associated conditions including cardiovascular disease, diabetes and even hip fractures.

The American College of Cardiology however, has found evidence to suggest that overweight children who reach a normal weigh by the age of 20 may have better cardiovascular outcomes than those who remained overweight. Since children whose parents have overweight are more likely themselves to have it, changing diet can be a potent method of improving health outcomes.

As the Chief Medical Officer in England, Professor Chris Whitty pointed out in his lecture to Gresham College in April of this year, the places where poorer people live are often designed in such a way as to make taking physical exercise significantly more difficult than in places where wealthier people live. These are multifactorial and complex. But the benefits of regular physical exercise, for mental as well as physical health, are undeniable. The WHO recently published the stark statistic that people who “are insufficiently active have a 20% to 30% increased risk of death compared to people who are sufficiently active.”

Cardiovascular fitness is associated with better cognition among adults. Ted Garland, professor of biology at the University of California told the Guardian: “Those who have grown up doing regular exercise are more motivated to get out there and exercise as adults. This could be linked to the effect of exercise on the brain’s reward-feedback loops. We know that exercise increases the levels of neurotransmitters such as dopamine and, to an extent, serotonin, and that has a kick-back effect on motivation that persists for quite a lot of time.”

In short, health outcomes are vastly improved when children, and the adults around them are able to live healthier lives.

This is the work that C3 has been doing since its inception in 2010. We are currently working with healthcare professionals wishing to learn more about how they can positively impact health outcomes beyond the direct work they do in a clinical setting. Furthermore, as part of the ASPIRE Programme we’re engaging communities in both England and France looking to make positive, lasting changes to their built environment and the consequent health outcomes. To hear more about these and our other projects, join our network here, and follow our blog here.