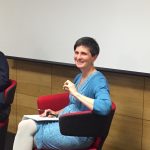 Briefing papers for the Health Foundation

In 2016, we received an award from the Health Foundation to undertake a scoping exercise to capture existing evidence to support healthier lives in the United Kingdom.

Through this award, we completed a series of briefings in C3’s areas of expertise. You can download each as a pdf below:

Building on this series, we facilitated a two-day meeting (pictured: Alonzo Plough, Robert Wood Johnson Foundation; Jo Bibby, the Health Foundation; Christine Hancock, C3) in June 2016 that brought together experts to identify approaches that can help people maintain good health and prevent illness. The focus was on children and young people in the 0-25 age-group.

The promotion of good health is often underfunded compared to treatment of disease. The meeting considered the ways in which foundations are uniquely placed to make change, explored the populations and system-based approaches that could be the Health Foundation’s future focus, and the partnerships that can take this forward most effectively.

The Health Foundation is an independent charity committed to bringing about better health and health care for people in the United Kingdom.

Read more about our projects with organisations, particularly our UK community engagement programme.