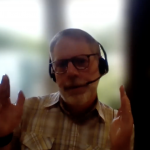 E-cigarettes continue to be a polarising issue across the public health world, as was evidenced during an exchange between two public health experts at C3’s most recent workplace health webinar run in partnership with the Society of Occupational Medicine.

On Tuesday, 21 September 2021 we invited Martin Dockrell, the Tobacco Control Lead at Public Health England to speak to us about the often-divisive subject of e-cigarettes. Dockrell began by outlining the consensus reached in the UK since 2008 on nicotine harm reduction following a contemporaneous report by the Royal College of Physicians. He showed that since the advent of e-cigarettes in 2012, rates of smoking among adults in the UK have gone down by 1/4 and in adolescents they have gone down by half. Since 2016, e-cigarettes have been tightly regulated in the UK with an early age of sale of over 18, limits on nicotine concentration, and child-safety precautions of products as well as warnings on packs that are required on all other nicotine products.

He spoke of the three main questions around e-cigarettes:

How harmful are e-cigarettes?

On the first question, Dockrell has a history of advocacy and experience with harm reduction. He was involved in the AIDS crisis of the mid 1980s when he was involved in developing and evaluating harm reduction interventions in London, first in drug use and then in sexual health. Dockrell noted that in September 2020, the Committee on Toxicity concluded that vaping is less harmful than smoking, echoing the US National Academy of Sciences.

Do they help smokers quit?

A 2021 Cochrane review concluded that people using e-cigarettes were around twice as likely to quit smoking as people using nicotine replacement therapy (NRT).

Do they encourage young people’s use of nicotine products?

On the final question, using data gathered by Action on Smoking and Health (ASH) in a youth survey and combined with four other surveys completed by UK youth organisations with a total joint sample of about 60,000 young people, he showed that there was little evidence to support a long-term increase in e-cigarette use among young people. This combined with the halving of youth smoking since 2012 is encouraging indeed.

Distinguish between smoking and vaping: conflating vaping with smoking is harmful to people’s health since it muddies the waters between to two and can give the impression that both are equally harmful.

Protect bystanders: Signs can make clear where vaping is permitted and where it isn’t. Requiring vapers to stand with smokers in smoking areas puts them at risk from passive smoke inhalation.

Protect children and young people: Tougher measures may be important in children’s spaces, so as not to expose them to even the far less-toxic particulate matter emitted from e-cigarettes.

Support smoke-free policies: Here, Dockrell gave an anecdote from PHE’s own offices where a man who was trying to quit smoking told him that because of the rules requiring him to vape or smoke off the building’s campus, the time constraints meant that in order to give himself enough of a nicotine hit, he needed to smoke. The man did not smoke at home, or out with his friends, only at work for Public Health England. As Dockrell described it: “a massive own-goal for PHE”.

The UK’s gamble on e-cigarettes – will it pay off?

In the final five minutes Dockrell invited thoughts from the Hong Kong–based international tobacco control advocate and former C3 speaker, Dr. Judith Mackay. Dr. Mackay pointed out that her work focuses largely on low- and middle-income countries (LMICs) where the primary epidemic is combustible tobacco and so to add on a secondary epidemic of e-cigarette products would, in her opinion ‘be a disaster’. She also pointed out that about 40 countries have now banned e-cigarettes completely, while another hundred have ‘pretty stringent’ regulations, thus concluding that there is international consensus that e-cigarettes are not the only solution to smoking cessation. She concluded by saying the UK has gone out on a limb and that it will be very interesting to see what the future outcomes are.

Dockrell countered that the UK were among the first to heavily regulate the market around e-cigarettes and contended that Britain had been very effective in preventing youth uptake.

The full event is available now to be viewed online here.