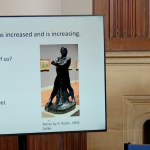 Prof. Chris Whitty opened by noting that people should feel absolutely no shame or embarrassment about obesity. It is purely something to be concerned about from a medical point of view and it was through this lens that he would be discussing the subject.

The Association Between Poverty & Obesity

What was interesting was how quick the CMO was to point out the association between deprivation and obesity. Areas that suffer greater deprivation have significantly higher instances of overweight and obesity. In fact, in areas that are less deprived, obesity levels have stabilised or decreased ever so slightly. Meanwhile, the most significant increases have taken places among those living in more deprived areas.

Whitty points out that this issue is found across other Western countries: this is not a uniquely British problem.

Prevention and What C3 Is Doing

In terms of prevention, primary care givers play a central role in secondary and tertiary prevention. Secondary: when people already have obesity and need guidance to lower their BMI safely and tertiary: when obesity is negatively impacting people’s health and requires medical intervention. It often falls to the state however, to focus on primary prevention (before people have begun to have obesity). This is where C3 does its work with the likes of Project ASPIRE. We collaborate with communities in areas of high deprivation both in England and France, equipping them with the tools to improve their built environment and promote healthy lifestyles whilst also promoting job opportunities.

Places where there are lower levels of affluence are often difficult places to do exercise. As Prof. Whitty said: “If you go around areas where there is more deprivation you will see why it is harder to do exercise in those places.”

It is for these reasons that C3’s work with communities to help them identify, using technology like our CHESS process, what in their built environment is preventing them from leading the healthier lifestyles which are comparatively more accessible to people of different socio-economic strata.

Hugo was communications officer for C3 Collaborating for Health.
Share this: