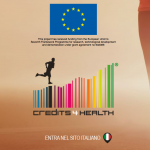 From 2014 to 2016 we were one of 15 European partners in a EU-funded research initiative, Credits4Health.

Through randomised control trials, Credits4Health looked at a new way to enthuse and engage people in Spain, Greece and Italy in their own health through an e-platform providing personalised support. The goal? To change individual behaviour by helping people increase their physical activity levels and eat more healthily.

Through a combination of:

participants set and reached health goals to accrue points, which could then be redeemed with local businesses.

What was C3’s role in Credits4Health?

We advised Credits4Health on behaviour change and participative design, and led the collaborative platform design process. We were also responsible for leveraging our extensive network to engage with European experts in digital health and behaviour change.

Our work included holding an expert review workshop on the e-platform. Using the workshop’s feedback, we then ran technical development workshops with the consortium’s web team in Rome. We also modified the tone of the e-platform to make it more appealing to a non-clinical audience.

To support Credits4Health, we partnered with University College London’s Centre for Behaviour Change to establish an online network of European academics and practitioners in digital health behaviour change. The ‘CBC Digi-hub’ partnership linked CBC’s training and capacity-development content with C3’s networking skills to create an outreach programme sponsored by Credits4Health.

Although similar networks existed in North America and within some individual European countries, at the time of the project there weren’t networks linking digital health and behaviour change professionals across Europe and across sectors. Collaborative opportunities were being missed, with much siloing of digital health and behaviour change efforts.

As part of our efforts to create a sustainable network, management of the CBC Digi-hub transitioned in January 2017 entirely to UCL CBC. To become a member of the digi-hub, visit UCL CBC’s website and join the LinkedIn group.

The Credits4Health consortium was led by the University of Florence, and the initiative was funded by the EU Seventh Framework Programme FP7/2007-2013 under Grant Agreement no. 602386.