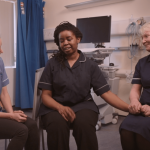 The NHS should heed the clear message from a powerful new film: look after the nurses you’ve got. By nurses for nurses, the timely film No Yeah Buts explores their stress, anxiety and fatigue and ways in which unhealthy coping mechanisms can be replaced by healthy ones. The aim is to deliver a clear message to NHS employers and to encourage more nurses to sign up for the NURSING YOU programme, which includes a weight management app and resources for nurses to make changes at their workplace.

At the launch of the film in London on 17 June, Professor Anne Marie Rafferty CBE, President of the Royal College of Nursing said ‘This really speaks to the dilemmas that nurses are wrestling with on a day-to-day basis. It’s an intelligent approach to try to design out some of the unhealthy habits and replace them with ones that are healthier, giving nurses back some form of control and the sense that we can change and be in charge of our destiny. And when we do it collectively we’ll all benefit, and less fatigued nurses will impact on patient safety’

Recent surveys of nurses from the Nursing Standard and Cavell Nurses’ Trust found that:

C3 Collaborating for Health, who created NURSING YOU with the RCN and the app with MAXIMUS UK, joined with Human Story Theatre and Nice Tree Films to use an arts-based approach to tackle this sensitive issue. Taking the format of a film within a film it’s based on interviews with nurses talking about the difficulties of their working environment and their personal struggles to eat healthily or drink less or give up smoking.

Editors’ Note: C3’s founder, Christine Hancock, former general secretary of the RCN and President of the International Council of Nurses, is available to interview about the film and the issues it raises.  To arrange an interview or for further information call Ellie at Chamberlain Dunn 020 8334 4500 or Ali on 07958900766