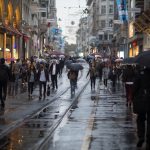 ‘A silent storm is sweeping our city,’ declared Houston Mayor Sylvester Turner in his opening address at the Cities Changing Diabetes (CCD) Summit hosted in downtown Houston last week. And no, he wasn’t referring to the recent Hurricane Harvey that devastated the city and left tens of thousands without homes. Instead he was alluding to another disaster wreaking havoc across communities, not only in Houston, but across the world: diabetes.

Type 2 diabetes is identified by the World Health Organization as one of the four major non-communicable diseases (the others are cardiovascular diseases, lung diseases and many cancers). Together, these diseases account for 70% of deaths worldwide each year. On the first day, presenters at the CCD Summit repeated a litany of dire statistics, including:

The refrain of the Summit was clear: our current trajectory is unsustainable, and we must ‘bend the curve’ of diabetes prevalence. And with more than half of the world’s population today (3.9 billion people[5]) living in cities, the obvious place to start is with the world’s urban areas. Cities Changing Diabetes has set a bold goal of holding the rise of diabetes prevalence so that by 2045 no more than 1 in 10 adults globally have diabetes. How? They’ve modelled the diabetes curve and determined that obesity must be reduced by a whopping 25% by 2045. But what is Cities Changing Diabetes and how can they achieve this goal when worldwide the burden of non-communicable disease continues to escalate?

What is Cities Changing Diabetes?

Cities Changing Diabetes is ‘a partnership programme initiated by Novo Nordisk in response to the urgent challenge caused by the dramatic rise of urban diabetes.’ The partnership includes a range of cities in size, language, culture and geographic location: Copenhagen, Houston, Johannesburg, Mexico City, Rome, Shanghai, Tianjin, Xiamen, and Vancouver. During the Summit the exciting announcement was made that more cities will be added to the partnership in the coming year, including Hangzhou and Beijing.

Novo Nordisk president and CEO Lars Fruergaard was quick to address potential cynics in the audience. Can a company producing diabetes medication truly work in diabetes prevention? The short answer is yes. Even if we are successful in holding the rise of diabetes, there will still be millions in need of medication. ‘Producing life-saving medicines is a significant endeavour but it takes more than that to combat diabetes. Cities Changing Diabetes is a wake up call for all of us about diabetes. Diabetes is referred to as an emergency in slow motion but I don’t really see that – it’s accelerating. For Novo Nordisk, bending the curve means saving lives, reducing human suffering and contributing to the sustainable healthcare systems of tomorrow – three objectives that are fundamental to our purpose of defeating diabetes,’ Mr Fruergaard stated during his welcoming address and in a LinkedIn post on the day.

How do we ‘bend the curve’?

With the context well-established, the Summit then tried to answer the question on everyone’s minds – how do we ‘bend the curve’?

This cannot be emphasised enough (and is at the heart of C3’s work). No matter how much money you pour into an intervention, or publicity and marketing you use, a health intervention will not succeed unless it makes life easier for the individuals it is targeting. Our environments wield tremendous influence over our actions and lifestyles. People lead busier and busier lives. It’s up to us to work interventions seamlessly into life so that it seems easy, or the most common-sense way to live. Knowledge alone is insufficient, as revealed by Professor Marguerite Butler who opened the Summit with a moving firsthand account of what it’s like to be a person living with diabetes.  Why do people continue to eat fast food even though it’s well-known that fast food is bad for our health? ‘It was cheap, it tastes good and I did not have to prepare it,’ she explained. Why aren’t people exercising more? ‘Exercise does not come naturally in a city like Houston,’ a city known for its urban sprawl, lack of public transportation options and poor walkability.

This desire for easy living can be used to our advantage. According to Mayor of Health and Care for Copenhagen, Ninna Thomsen, there are over 400 km of bike lanes and six times as many bikes as cars in Copenhagen. ‘I take my bike to work. Why? It’s easier! And safer. My kids take their bikes to school everyday. Why? It’s easier.’ Make the healthy choice the easy choice, and better health can follow.

Between sectors, within the same sector, across different fields – all agreed that partnerships are vital to achieving our goal of ‘bending the curve’. While this may seem obvious, building partnerships is simple to recommend but harder to make a reality. Competition, distrust, power dynamics, funding and time constraints, lack of awareness about other groups and their work – all can make partnership working difficult.

But, without partnerships, interventions are less likely to succeed. Take an example from the assistant director of the Houston Health Department, Faith Foreman. She spent time passing out free bike racks to Houstonians, only to later discover that there were rules about the number of bike racks allowed in specific areas. Partnering with the individuals with the power to change those regulations is necessary if her mission of increasing the number of bike racks in the city will succeed.

Another vital but overlooked connection? ‘Climate change and health are inextricably linked and cities are central to this battle,’ explained Keith Austin from C40 Cities. ‘Climate health and public health have the same goals but are looking through a different lens.’ The sooner they realise this and work together the better.

[Need advice about establishing partnerships? Collaboration is in our name – read about our partnership approach and then contact us for more information.]

3. Toolboxes can only do so much

At the Summit, Cities Changing Diabetes unveiled its latest effort: an Urban Diabetes Toolbox, which ‘enables city and health leaders around the world to create their own action plan for tackling diabetes in their city.’ Included in the Toolbox are examples from other cities.

However, as the speaker noted, ‘only when applied and brought to life is when toolboxes actually drive change.’ It’s up to each of us to take the guidance from the Urban Diabetes Toolbox and actually put it into action. Each city can do this by:

Overall, we must not forget that we are facing a serious health crisis. But, cities are best placed to enact change. ‘Cities act while nations talk,’ contended Doug Langa, Executive Vice President, North America Operations and President of Novo Nordisk Inc. While nations waffle, cities are the ones closest to the people they represent, implementing positive changes called for by their communities in support of their communities’ health. Even with cities’ support the goal to ‘bend the curve’ is daunting. Summit speakers left us on a hopeful note: ‘We will be successful in this fight. I say this because I know we’re focused, determined, using data and science. Please keep up the fight. You’ll save many lives.’

Read about C3’s work partnering with communities and with businesses such as Novo Nordisk.