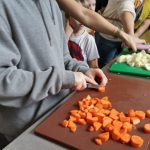 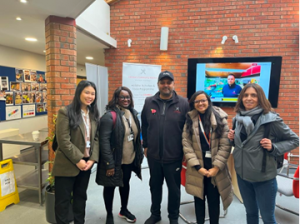 On 8 November 2022, C3 travelled to Harrow and Wealdstone in West London to visit London’s Community Kitchen (LCK). Having started in a small church, LCK is now operating out of three London boroughs – Barnet, Ealing, and Harrow – where the H.Q. sits within a large community centre building.

Led by Taz Khan, the space gave a feeling of community, hope, and motivation. The group spent the morning taking a tour of LCK, winner of the Observer Food Monthly Awards 2022, to see what all the buzz was about. In the UK more than 9 billion tons of food is wasted each year. At the same time almost 2 million citizens struggle to secure access to enough food in London. The problem was literally brought home to Taz when he discovered his son was taking double his usual amount of lunch to school. It turned out he was taking more because his friend could not afford to bring lunch to school, and was sometimes having to go hungry. Seeing that something needed to be done to aid London’s hungry and vulnerable, Taz founded London’s Community Kitchen in 2013, with the guiding ethos ‘zero waste, zero hunger.’

Contrary to popular opinion, Khan’s organization does not only get the “ugly” produce or leftover foods from grocery stores. In fact, most of the produce LCK receives is a result of flux in market demand for certain foods. Supermarkets overstock products even if they know some will go to waste because research shows that consumers are more likely to buy products that are fully stocked. Factories and warehouses must get rid of extra items that were produced too late for delivery, in order to make room for the next batch of items. Supermarkets will also often refuse delivery from producers if the product isn’t selling on their shelve. LCK receives these items and stocks them in their food storage room.

LCK is also the largest benefactor of HelloFresh – a mail-to-door company that creates pre-packaged meals for busy consumers. When they receive cancellations, backorder issues, etc. the surplus food boxes go straight to LCK.

It doesn’t stop there. LCK isn’t just a place where people can get food that would otherwise go to waste, but also an actual kitchen where families can learn to cook meals on a budget. Khan has also transformed a large room in the space to replicate an industrial kitchen – much like the set up one can see on the Great British Bake Off. The kitchen holds free classes for those living with disabilities and for school children on field trips. Not only is it a fun and independence-promoting activity, but the novice chefs get to take their meal home at the end of the session.

Sustainability and the Kind Café 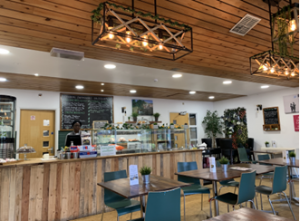 The first thing you see when you approach the unassuming, but spacious building is Kind Café. Attached by a corridor to the food storage area the café is made entirely out of scratch, and we don’t just mean the food. Even the furniture in the café embraces LCK’s no waste ethos. The bar is made from leftover wood the staff at LCK sanded down themselves and wooden planks found in a construction project nearby. Even the farmhouse-mimicking light fixtures are made by hand from leftover materials.

In addition to the lattes and americanos, Kind Café has a bowl of seasonal fruit that is free for any school children. The kitchen stirs up dishes for a reasonable price made from the seasonal vegetables and other grains that are from the kitchen’s food supply. Having once been a chef himself who worked under the famous Marco Pierre White of the London Steakhouse and Mr. White’s, Khan has a taste for high flavour and nutrition with low cost. Many of the weekly dishes circulate around themes of Indian cuisine, a homage to his heritage, and Khan’s mother, who you can often see walking around in the centre, brings in spices and vegetables from home that she thinks might complete a dish. 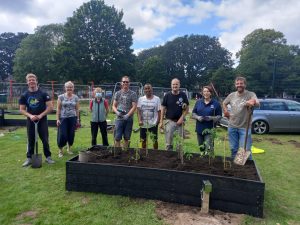 Work like LCKs showcases how big of an impact community mobilization can have. C3 has long viewed community engagement as key to improving global health. C3 is a partner in ASPIRE (Adding to Social capital and Individual Potential In Disadvantaged Regions) an EU funded project aiming to reduce obesity and unemployment in France and England. As part of this C3 use CHESS®, a mobile app that helps communities become citizen scientists, using the app to survey and analyse how their local environment influences them to make healthy and unhealthy choices. Together C3 and the community then use the results to come up with activities to improve health outcomes in the local area. In the past these activities have taken the form of free healthy cooking classes, grow your own eat your own projects, yoga classes and wellbeing walks to name a few.

It doesn’t stop there, C3’s nursing team has launched Nurses for healthier communities (N4HC). Funded by the Burdett Trust,  N4HC works to improve the health and well-being of nurses from ethnic minority backgrounds and the wider community that were disproportionately impacted by Covid-19.

The project runs across 3 boroughs Brent, Ealing and Harrow. C3 aims to connect N4HC with community focused projects like LCK, encouraging nurses to improve their health and  wellbeing through a holistic approach This project is also the opportunity to involve community members in the local food system by facilitating the learning of skills such as growing fruits and vegetables for cooking.

The idea is to direct these nurses to a pathway that leads into better health for themselves amidst their very busy schedules which in turn would also positively impact their families and local communities.

If you liked this you might also enjoy, Ultra processed foods: why are we eating so much?