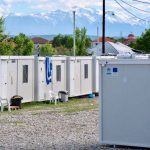 C3’s Ina Andersson spent a month volunteering in the Alexandreia refugee camp in northern Greece, where residents are experiencing a number of health problems. Managing chronic disease is only one of them.

About 400 refugees, mainly Syrian, inhabit the camp set up on a disused Greek military base. Children escape the darkness of the large metal containers used as housing early in the morning. They move in groups towards the play area, complete with astro turf for ball games and a playground with swings and a climbing wall. If you’re an adult however, opportunities for getting exercise are limited. Lack of physical activity is one reason camp residents struggle with their weight says Katarina Zollerova, social worker and medical team coordinator at the camp. Diet is another, with large amounts of oil often used in traditional Syrian cooking.

In addition to overweight and obesity the medical team sees related complications such as type 2 diabetes and hypertension. Many refugees arrive at the camp without their medication, but luckily availability of medication for chronic disease is good in Greece. Refugees will tell the medical team what medication they were on previously and be put back on these when they arrive. Every month a mobile cardiology clinic comes to the camp to do checks such as blood pressure, and residents known to have diabetes get their blood pressure and blood sugar levels checked from time to time to make sure that their medication is working. There has been one case of high risk pregnancy in the camp with a woman who was obese and had type 2 diabetes, who unfortunately lost her baby. Whilst such events do occur Katarina stresses that when it comes to chronic disease, on average the Syrian refugee population is about as healthy as any European country population and experience the same chronic disease causes, problems and solutions.

Katarina is also careful to emphasise that the biggest health problem experienced by residents in the camp is mental health. She estimates that 90 per cent of the camp population suffer psychological problems as a result of the trauma of war. These are expressed for example through panic attacks, severe flashbacks, somatising of mental health problems (psychological distress resulting in physical pain) and suicide attempts. There are no psychologists in the medical team at the camp however and refugees instead get referred externally, although many do not want to be referred. Whilst there is much evidence of the benefits of physical activity to mental health, the mental health problems experienced by refugees are often too severe to be tackled by exercise alone.

The medical team working in the camp receives its funding from St Elisabeth University of Health and Social Work in Slovakia. Alongside the medical team about 12 other organisations work together every day providing aid and assistance to the refugees while they wait to be relocated in Europe or, some hope, return home.